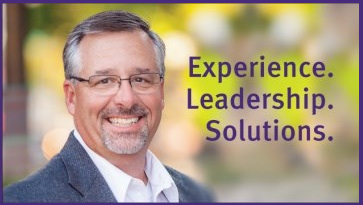 A lifetime in law enforcement has prepared Allen Jones to be the next Sheriff of Champaign County.

Allen grew up in Rantoul where his father served as police chief.  After graduating from Illinois State University, Allen started work at the Champaign County Sheriff's office in the corrections department.  Allen's hard work, ability, and leadership skills led to numerous advancements within the Sheriff's office, culminating in his being named Chief Deputy in 2013.

When Sheriff Dan Walsh announced his retirement, Allen became a candidate with the full support of Sheriff Walsh.

As the next Sheriff, Allen will tackle the need to close the downtown jail facility, which does not meet current standards.  He will also be working to find new space for housing prisoners with mental health issues, medical issues, and other special populations.  He will continue the excellent patrol work of the Sheriff's office in those areas outside the jurisdiction of municipal police forces.

Allen and his wife reside in Rantoul.  They have four sons.  Allen is an active member of our Champaign County community.  He serves on the OSF Heart of Mary of Medical Center Community Leadership Board.  He volunteers his time as an assistant baseball coach for Rantoul High School.

or
Please check your e-mail for a link to activate your account.